Dr. Cosmas Maduka is the founder/CEO of ‘Coscharis group’, a company which has a presence in Beverage industry, Automobile industry, Agro-allied services and much more.

As a young child who lost his father at the age 4, he never stooped so low to what life can offer. His humble beginning and success story has inspired a lot of young people and has taught them that there is no limit to what we can achieve.

Narrating his entrepreneurial journey during an interview with the Vanguard newspaper, he shared some business tips that have gotten him to where he is now.

In 1977, after serving his uncle as an apprentice, he was settled with two hundred naira which is equivalent to $1 as at 2014/2015. Meanwhile, with the current exchange rate of the dollar to naira been 360, it’s not even up to $1 in today’s economy.

He went on to found his first company ‘’MADUKA BROTHERS as a sole trader, a company that deals with importing motorcycle and its spare parts,  after which he moved on to partner with his bosom friend,(Mr. David Nwosu) to startup a  new company that deals on the importation of car parts. Shortly after the company was dissolved, he went on to starting Coscharis motors and the rest is history. According to Forbes Magazine, Coscharis group is said to worth five hundred million dollars.

STICK TO YOUR DREAM:

As he always says, “my dream is to build an institution that is capable of competing with big companies like Leventis motors and UAC”. Today, we could see how far he has gone with that dream.

When he finally started seeing the dividend of his hard work, he didn’t spend it on luxury. Even though he had the money to buy up to 20BMW cars, he never did that. Rather, he sticks to his old 504 model of Peugeot in order to nurture his profit.

Being someone who only had a 3rd-grade education, he grew his business to the point of a plateau, in order to get to the next level; he hired a professional manager to make it work. However, he still went on to attend a program at Harvard University.

DO NOT HIRE LIKELY MINDS:

“At Coscharis, we do not think alike, because if we do, nobody is thinking”. Those were his words during an interview session with a journalist.

“Anything worth doing is worth doing well” Your level of commitment towards your goal determines how successful it will be. He said,” At age 14, I made a commitment to serve God, this decision shaped my life”.

“Beware of little expenses, a small hole can sink a big ship –Thomas Jefferson”,  Cosmas claims that ever since he heard the above-written quote of Thomas Jefferson, it has helped him build the right foundation for money. 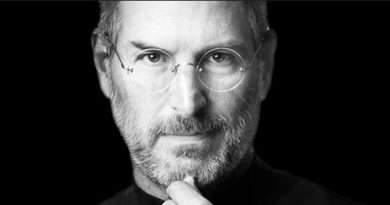 HOW STEVE JOBS MADE IT TO THE TOP